”
View
Sort by
Information about the ranking of search resultsLearn more 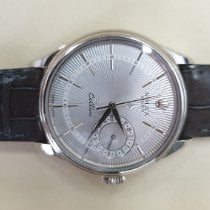 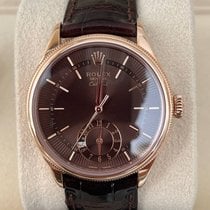 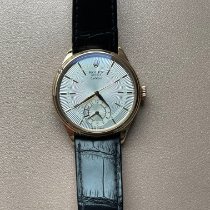 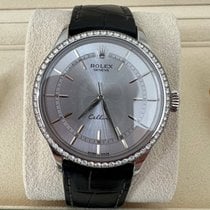 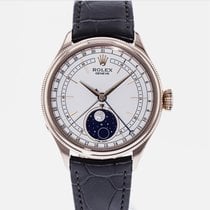 Chrono24 Buyer Protection Has You Covered

The history of the Rolex Cellini dates back to the very beginnings of Genevan luxury watch manufacturing. Rolex used the name for individual models at irregular intervals until the early 1960s, when marketing director René-Paul Jeanneret made sure the Cellini became its own stand-alone collection.

The collection differs greatly from the rest of the Rolex catalog. In contrast to other Rolex sports and tool watches like the Submariner, Daytona, and Datejust, the Cellini is focused on classic elegance. You won't find the omnipresent Oyster case here. The series has seen innumerable variations through the years, in almost every conceivable permutation. Particularly prominent examples include the Cellini King Midas, the Cellini Danaos, and the Cellini Prince, all of which share the collection's unifying features: flat crowns and gold cases.

The series is named after Italian goldsmith and sculptor Benvenuto Cellini (1500-1571), one of the most important artists of the Renaissance era.

Reasons to Buy a Rolex Cellini

How much does a Rolex Cellini cost?

Prices at a Glance: Rolex Cellini

If you want a modern version of the Cellini, the three-handed Cellini Time is the most inexpensive option. Depending on whether the watch is made of rose or white gold (ref. 50505 or 50509), you can expect to spend between 14,000 USD and 14,500 USD.

The top model in the Cellini series is currently the Cellini Moonphase ref. 50535, which, along with a moon phase display, also features a pointer date. Plan to spend around 28,500 USD on this rose gold watch.

You can buy vintage Cellini models on Chrono24 starting from 1,700 USD. However, depending on the condition, model, and materials, these watches can easily sell for well over 20,000 USD.

Is the Rolex Cellini a good investment?

Most Rolexes make sound investments. Their stainless steel sports models have performed especially well in recent years, but the Cellini collection lagged behind. Along with watches like the GMT-Master and the Explorer, watches in the Cellini series spent many years in the shadows. At times, demand was so low that market prices for these watches were lower than their list prices.

But the Cellini has rallied. Between June 2020 and June 2022, newer models like the Cellini Time, Cellini Date, and Cellini Dual Time increased in value by 10% to 30%. Even the Cellini Moonphase, the last Cellini in the Rolex catalog since March 2022, showed a 37% increase in value in the same timeframe.

Vintage Cellini models tend to retain their value well. The risk of losing money on such a watch is therefore low. However, there are also vintage Cellinis with potential for appreciation. The rose gold Cellini Prince ref. 5442 cost nearly 14,500 USD in June 2022. Two years prior, it was priced at only 12,000 USD. That's an increase of 21%.Another example is the price for the Cellini 4350, which went up by some 40% to approximately 10,000 USD in June 2022.

The Cellini distinguishes itself from other Rolex watches with its streamlined, delicate design. The case is 39 mm in diameter, a size suitable for almost every wrist. Rolex offers these timepieces in either 18-karat white or Rolex's proprietary rose gold alloy, Everose gold. Thanks to downward sloping lugs and bent spring bars, there is only a small space between the case and strap. The latter comes in black, blue, or brown alligator leather with an 18-karat gold pin buckle.

The unusual bezel construction uses two individual rings, one domed, the other fluted. Scratch-resistant sapphire crystal protects the silver, white, brown, blue, rose-colored, or black dial, which comes either lacquered or engraved with a guilloché pattern. Along with applied indices and lancet hands, the watch features elongated Roman numerals at 3, 6, 9, and 12 o'clock. You'll also find index-only models without numerals. Neither the indices nor the hands feature any luminous material. "Cellini" is written clearly in cursive script above the 6 o'clock position. Thanks to the screw-down crown and case back, the watch is water-resistant to 50 m (5 bar, 164 ft). Other dress watches are typically rated to just 30 m (3 bar, 98 ft) and are thus barely protected against anything more than a splash of water.

In the standard version of the Cellini Time, Rolex keeps it simple. The streamlined, three-hand watch rejects any additional functions so that you can focus on the time. If you'd prefer to have a date display, the Cellini Date is the watch for you. This timepiece shows the date using a small hand on a subdial at 3 o'clock.

The Cellini Dual Time is ideal for frequent travelers. It has a subdial at 6 o'clock with two hands indicating the time in a second time zone. A day/night display sits within the subdial at 9 o'clock; here, you'll find a small sun or moon icon, depending on whether it's night or day in that time zone.

The Cellini Moonphase will definitely appeal to lovers of watches with a moon phase display. Introduced by Rolex in 2017, this watch was the first Rolex since the 1950s to feature this complication. The display is positioned at 6 o'clock and offers astronomical accuracy for 122 years. The full moon symbol is made of meteorite. The watch also features a pointer date that indicates the date via a central hand, with a tiny half-moon at its point, and a scale around the edge of the dial. In contrast to other models, the Cellini Moonphase is exclusively available in rose gold with a white lacquered dial.

Vintage Cellini: A Cornucopia of Designs

The Cellini collection is a treasure trove for fans of vintage watches. The range of pre-owned models is vast and offers something for every taste. Take the Rolex King Midas ref. 9630, for example, introduced by Rolex in 1962 and named after the Greek mythological figure whose touch turned everything to gold. Befitting the myth, the strap on the King Midas is made of solid white or yellow gold. Rolex produced only 800 of these watches between 1962 and 1978.

This elegant timepiece's most notable feature is its asymmetrical polygon case with a crown on the left-hand side. The watch also has an integrated watchband made of solid gold. Rolex outfitted the King Midas with caliber 650, which is based on the Piaget Cal21. The display is especially economical: just two central hands marking the minutes and hours, with the Rolex logo at 12 o'clock and "Midas" inscribed in Greek at 6. The King Midas comes with a sapphire crystal, and was one of the first Rolex watches manufactured with this material.

The King Midas' design allegedly sprung from the pen of famed watch designer Gérald Genta. Genta is perhaps best known for his work on several industry icons, including the Patek Philippe Nautilus and Audemars Piguet Royal Oak. The Rolex's unique aesthetic found a fan in the King of Rock 'n' Roll, Elvis Presley, who was frequently spotted wearing this model.

The Rolex Cellini Danaos also takes its name from a mythical Greek king – known in English as Danaus – but the model is much newer than the King Midas. Danaos watches fall into the "neo-vintage" category, which refers to timepieces from the early 2000s. Their flat, cushion-shaped cases call to mind vintage Rolexes with bubble back cases from the 1930s. The Rolex Cellini Danaos ref. 4243 measures 38 mm in diameter, making it a fantastic option for men and women alike. The 33-mm ref. 4233 is better suited to smaller wrists. The Cellini Danaos Lady ref. 6229 is even more delicate at 24.5 mm and sells for around 2,800 USD.

The Danaos is available in white, yellow, or rose gold, as well as in two-tone versions in white and rose gold, and can be purchased for between 4,000 USD and 10,000 USD.

A rectangular case, Art Deco design, and a small seconds dial at 6 o'clock – these are the characteristics that make the Cellini Prince so special. The Cellini Prince, like the Danaos, is a neo-vintage watch, but its design pays homage to the Rolex Prince ref. 971, introduced by Rolex in 1928.

Unlike its historical antecedent, the Cellini Prince houses a modern hand-winding caliber 7040. Rolex decorates the caliber components, which you can see through a sapphire crystal case back – a real rarity from this Genevan manufacturer.